When we exercise we need more oxygen, and it is appropriate that we breathe more because at the same time our working muscles will produce more carbon dioxide. However, if we breathe in the same way when we are sitting quietly reading a book this will upset the vital balance between the two gas levels because we are not producing great quantities of carbon dioxide at this time.

Most people have experienced hyperventilation – also called over-breathing – to some degree, as its a normal response to stress. When exposed to sudden danger or excitement, and the signs are easy to pick:

Breathing and heart rate speeds up

Adrenaline streams into the bloodstream

The nervous system is on “red alert”

Muscles tense
Sometimes people collapse or faint – or find super-human strength. The body reaction’s is known as the fight or flight response, and when the stressful event is over, the body returns to its normal relaxed stated. Our breathing can affect the sympathetic nervous system which controls the “fight or flight” response.

When the body is understress, the hormones adrenalin and, to a lesser extent cortisol, are released into the blood stream. Hormones control many of the body’s activities including its preparations for fight or flight: 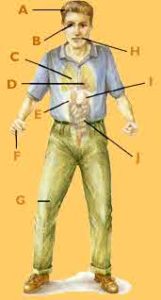 A Mind becomes more alert
B Eye pupils dilate to give clearer sight
C Breathing rates increase
D Heart beat increases so that more blood can reach the muscles
E The liver releases glucose to fuel the body
F Skin sweats to prevent the body overheating and turns pale because blood is diverted to the muscles. Hair prickles upward to increase sense of touch
G Muscles tense and give off lactic acid, which heightens anxiety
H Less Saliva is produced in the mouth
I Blood vessels in the kidneys constrict
J Digestion slows down

Chronic Hyperventilation
While the previous reactions are useful in the short term to allow a massive response to an immediate threat, they may be harmful over the long term. If sympathetic nervous system is stimulated constantly or the stress is prolonged, the body is not able to recover and breathing patterns alter, and over the long term, this can be both crippling and life threatening.

A constant shortfall in carbon dioxide leads the brain’s respiratory centre to accept this lower level as the normal marker point and then adjusts the breathing accordingly to keep carbon dioxide at this point.

“Hidden hyperventilation” is slightly deeper breathing than normal over a lengthy period, of which the person is usually unaware. Some of the signs include frequently breathe through their mouth, breathing from the chest instead of the diaphragm & breathing interspersed with sighs or yawns.

Chronic Hyperventilation causes a number of physiological changes:
Chronic hyperventilation upsets the vital body of respiration. A constant shortfall in carbon dioxide leads the brain’s respiratory centre to physiologically reset. The centre now initiates inhalations at a slightly lower level of carbon dioxide, resulting in a faster or deeper breathing pattern. An adequate level of carbon dioxide is vital for oxygenation because it controls the acid/alkali balance (pH) of the blood. When carbon dioxide levels start to drop, this leads to a condition called respiratory alkalosis. Haemoglobin forms a tighter bond with oxygen, resulting in less oxygen being released to the tissues. This poor oxygenation affects the whole body and leads to hypoxia.

To counteract respiratory alkalosis, cells begin to produce lactic acid. Lactic acid leads to tired, aching muscles and exhaustion. If you have has a particularly bad attack, you will have sore muscles particularly in your chest, shoulders and back. Smooth muscle throughout the body (airways, nasal passages, arteries, veins, bowel & brain) tighten restricting blood and air flow. The brain may for example receive up to 50% less oxygen when a person hyperventilates.