The nervous system is the cornerstone to our ability to perceive, adapt to, and interact with the world around you. It is the means by which you receive, process and then respond to messages from the environment and from inside your body. Part of this system is called the autonomic nervous system (ANS). One function of the ANS is to control the movement of non-skeletal muscles which are called smooth or involuntary muscles. Smooth muscle is found in the heart, brain and other organs. It wraps around the blood vessels and airways. It lines the tracts leading to outside of our body. We have little and in some cases no voluntary control over these muscles. We are usually not even aware of their functioning. In fact autonomic means “self regulating”; this system does not need our conscious attention. 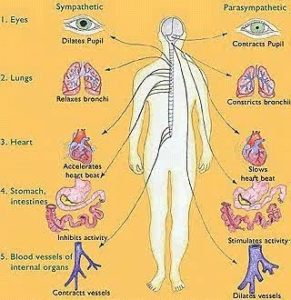 The autonomic nervous system transmits three different types of signals, each of which is handled by a specialized type of receptor.

Bronchodilators (relievers) are medications that stimulate the Beta-2 receptors, and cause the airways to open.

Recent research has shown that the beta receptors of asthmatics are defective. The parasympathetic nerves of an asthmatic overstimulate the bronchial tubes and this makes the tubes constrict. An overactive parasympathetic nervous system could explain why such nonspecific stimuli such as smoke, viruses and even sudden weather changes trigger wheezing in both allergic and nonallergic asthmatics.